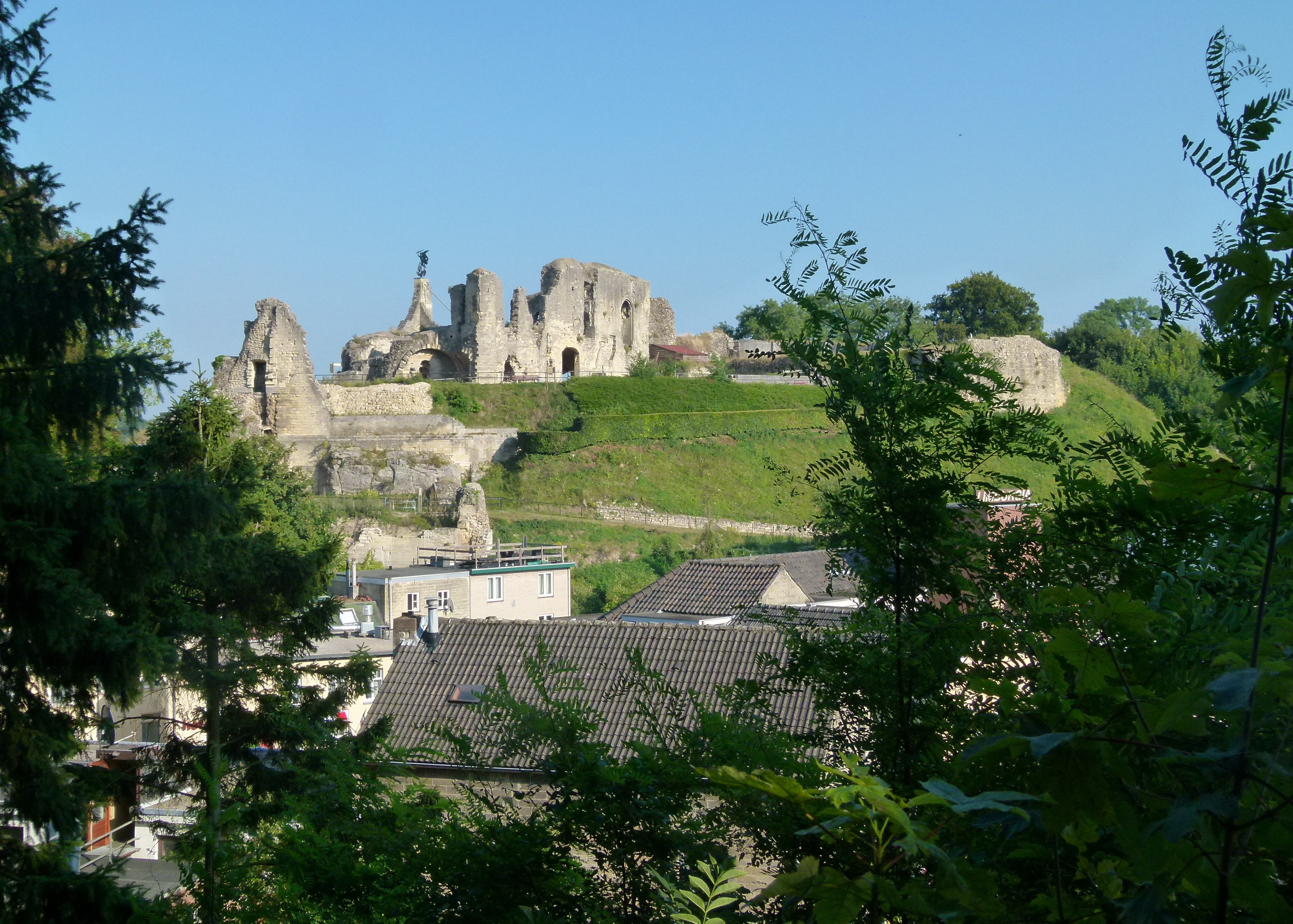 The Dutch Wikipedia article about Valkenburg calls this castle the only “hoogteburch” in the Netherlands, i.e., the only real castle on a sort of height or hill, the sort found so often elsewhere in Europe, but not in this land of plains.

The town itself is found near Maastricht in the far south of the Netherlands, in the province of Limburg, which is like a wedge between N-E Belgium and Germany, almost precisely between Genk and Aachen (or just as near Liège if you like). The main road from Maastricht takes a motorist in an almost straight line (over the famous Cauberg) to the town, which can also be approached from there by train.

As I first cycled from Valkenburg to Oude-Valkenburg to visit the castles there, I came back in the valley of the Geul and first saw Berkelpoort, a part of the old town walls:

To the left of these gates, we can already see some of the castle itself, towering above the town,

from where stone steps lead up the hill among nice marl rocks, which partly gave the material to the walls of the castle from the 11th to the 17th century. It is a beautiful path but not really worth climbing as the castle cannot be accessed through the little gate up there, only after climbing downstairs and turning right again, missing most of the town.

make some plans about what else to see later and then head towards Grendelpoort,

from where, keeping left, it’s real easy to reach the entrance to the castle. There are enough steps to climb here, but there’s also a huge new lift to take up those needing it.

Above, one arrives on a nice plateau with a restaurant and lots of room for sitting outside, and this terrace also provides great views of the town, first over Grendelpoort of course:

From here the visitor has a wonderful view of the outside of the inner castle:

It is only here that we have to pay an entrance fee to the inner castle as everything is free up to this point. Then a long walk takes us around in two directions, both leading to further steps inside.

There’s a very good view, complete with Belkerpoort, over the inner city towards the north from these walls:

Then we can visit what has remained of the former palace buildings after the French blew it up in the Dutch War in 1762: the chapel, the knights’ hall and some more.

In a corner of the knights’ hall, we can wonder why there are two such a huge piles of raw column basalt in the corner. But we can understand soon …

First we may circle the area to have further views, for example towards the quarries and the Wilhelminatoren, which can be reached by cablecar as well as on foot.

Then on towards the southern side of the palace remains:

And it’s here that we can understand the huge columns of basalt:

that is, they were used for strengthening the inside of that walls as the outer surfaces of marl may not be strong enough to withstand attacks. They were now used for reconstructing some of the old walls of course.

From here we can look around the area towards the Casino on top of the Cauberg:

before heading back to town. Enjoy your stay in Valkenburg!

If you are cycling, you can climb Cauberg instead of staying – but be prepared for a real steep climb. Afterwards, however, it’s real fast downhill to Maastricht, almost directly to the station to catch your train.